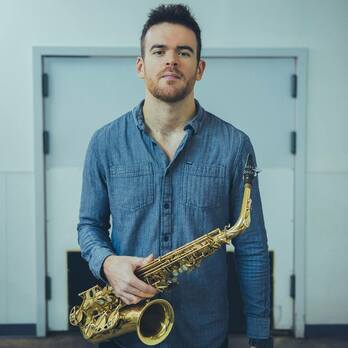 Native New Yorker, saxophonist and composer Andrew Gould has established himself as one of the most in demand players on the NYC music scene.

As a graduate of both Manhattan School of Music and SUNY Purchase, Andrew continues to teach regularly. He maintains a studio of private students, has taught private lessons at The New School, masterclasses at SUNY Purchase, Hofstra University, New York Youth Symphony among many more, and is a text lessons mentor with Chad LB text lessons.

Andrew has recently released his debut album "First Things First" on the Outside In Music label, which has received great critical acclaim. The Sam Dillon/Andrew Gould Quartet album “It Takes One To Know One” is due to be released on August 5th, 2022 on the Cellar Live label. Andrew also composes for and tours worldwide with rnb/soul band Nuf Said, which will be releasing a 3rd album in the near future. Other exciting projects include recording and performing with the 8 Bit Big Band, Steven Feifke Big Band, Peter Kronreif Wayfarers, Dan Pugach Nonet, the Revive Big Band (upcoming album to be released!), debut recording of Wayne Shorter’s "Universe" with the Wallace Roney Orchestra, and countless freelance projects in NYC and beyond.
​
Andrew is an endorsing artist with Conn-Selmer, D'Addario Reeds, KB Sax, and Silverstein Ligatures